QMX Gold to Complete More Than 35,000M of Drilling in 2020; Updated Bonnefond Resource Estimate on Track for Summer Release

TORONTO, June 23, 2020 (GLOBE NEWSWIRE) -- QMX Gold Corporation (“QMX Gold” or the “Company”) (TSX:V:QMX) is pleased to announce its 2020 summer exploration program. The program covers several targets on QMX Gold’s extensive land package in Val d’Or, Quebec (Figure 1). 2020 is expected to be a very active year for QMX Gold, with more than 35,000m of drilling planned and the release of an updated resource estimate. Currently, QMX Gold is operating three drill rigs on its Bonnefond deposit in order to complete the drilling required for the updated resource estimate later this summer. With this program nearly complete, drilling over the summer will focus on the Bonnefond Shears in the East Zone and the high-grade River and Poulmaque targets in the Bourlamaque Batholith.

“QMX Gold is in an exceptionally strong position with a solid balance sheet, multiple highly prospective targets in the Val d’Or East camp and its resource update expected in the coming months.” stated Brad Humphrey, President and CEO of QMX Gold “We are particularly excited about getting back on the River Target, commencing our first drill program on the highly prospective Poulmaque Target and continuing to expand the Bonnefond trend. With three drill rigs now turning and several holes awaiting assay results from the winter program, we anticipate a lot of positive news flow over the summer and into the fall.”

The Bonnefond Deposit and Shear zones, located in the East Zone, remains one of QMX Gold’s primary targets. Since January 2020, QMX Gold has drilled 18,000m on Bonnefond and is currently finishing the infill drilling program on the western part of the Bonnefond intrusive. Once the drilling is completed, QMX Gold will update its initial 2019 resource estimate and commence a 10,000m exploration drilling campaign to test the potential of the higher grade shear zones located north of the Bonnefond intrusive. The north shear zones have returned 3.90g/t Au over 6.2m and 3.14g/t Au over 7.9 m in DDH 17315-18-072 (See Press Release January 29, 2019).

The River Target, located in the eastern part of the Bourlamaque batholith, was one of QMX Gold’s highly successful targets drilled in late 2019. During the summer of 2020, QMX Gold will complete a second phase of drilling to further explore the potential of the River Target. This first phase will consist of at least 5,000m.

During the summer of 2020, QMX will conduct an initial reconnaissance drilling program of at least 3,000m in this area.

QMX Gold Corporation is a Canadian based resource company traded on the TSX Venture Exchange under the symbol “QMX”. The Company is systematically exploring its extensive property position in the Val d’Or mining camp in the Abitibi District of Quebec. QMX Gold is currently drilling in the Val d’Or East portion of its land package focused on the Bonnefond Deposit and in the Bourlamaque Batholith. In addition to its extensive land package QMX Gold owns the strategically located Aurbel gold mill and tailings facility. 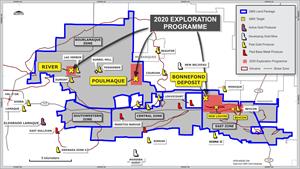