TORONTO, Nov. 19, 2019 (GLOBE NEWSWIRE) -- QMX Gold Corporation (“QMX” or the “Company”) (TSX:V:QMX) is pleased to announce that it has commenced an exploration drilling program on the River Target in the western part of its extensive land package in Val d’Or, Quebec (Figure 2). Expansion drilling on the Bonnefond Deposit is also underway.

QMX Gold Fall 2019 drilling program will consist of roughly 7,000m focusing on expansion drilling at the Bonnefond Deposit in the East Zone and reconnaissance drilling on the River Target in the Bourlamaque Zone.

The gold mineralization is hosted in quartz-carbonate-tourmaline veins associated with shear zones. Several other gold intercepts along the River Target strike indicate a broader potential for exploration. The ongoing 1,100m drilling program is an initial reconnaissance drilling program to test the geometry and grades. Follow up drilling will be results dependent.

The 6,000m Fall drill program on the Bonnefond Deposit started in September and is expected to be completed by the end of January 2020. This drilling campaign is focused on both the Bonnefond intrusive and the mineralized shear zones to the North and South of the plug. In the intrusive, drilling is focused on upgrading the inferred portion of the resource to the indicated resource category, while drilling outside the intrusive, in the higher-grade shear zones, is expected to improve definition and increase the grade and tonnage in the inferred category (initial NI 43-101 resource report filed September 17, 2019).

A broader Winter exploration program focusing on extensions of the overall Bonnefond mineralized system is currently being developed, scheduled and budgeted.

”We are in the powerful position having a multitude of highly prospective targets in our approximately 30 kilometres along the main mineralized zones in the Val d’Or region with several previous mines alongside,” says Dr. Andreas Rompel, VP Exploration, “yet we concentrate on the most prolific areas, one of them being the River area around the previous Lac Herbin and Dumont Mines. Thanks to our structural understanding of the mineralization, we are in a very good position to increase our resource base in this particular area.”

During the drilling program, assay samples were taken from the NQ core and sawed in half. One-half was sent to AGAT Laboratory or Swaslab Ltd., a certified commercial laboratory, and the other half retained for future reference. A strict QA/QC program was applied to all samples which included insertion of mineralized standards and blank samples in each batch of 20 samples. Gold content was determined by fire-assays on 50 grams of pulp with an atomic absorption finish. Repeats were carried out by fire-assay with a gravimetric finish on each sample containing 5.0 g/t Au or more. When visible gold was observed, a Pulp Metallic assays from all the pulverized material was completed.

The scientific and technical content of this press release has been reviewed, prepared and approved by Mélanie Pichon, P.Geo, M.Sc, Exploration Manager, QMX Gold, who is a "Qualified Person" as defined by National Instrument 43-101 - Standards of Disclosure for Mineral Projects ("NI 43-101").

QMX Gold Corporation is a Canadian based resource company traded on the TSX-V under the symbol “QMX”. The Company is systematically exploring its extensive property position in the Val d’Or mining camp in the Abitibi District of Quebec. QMX is currently drilling in the Val d’Or East portion of its land package focused on the Bonnefond plug and in and around the Bevcon Intrusive. In addition to its extensive land package QMX owns the strategically located Aurbel Mill. 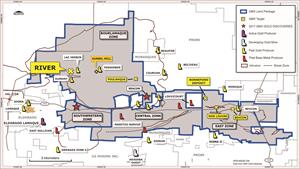